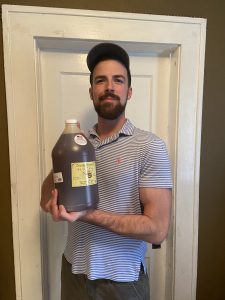 HCP’s Vice President, Robert Allen, has been with the company for two years and oversees all the firm’s research methodologies and information gathering.

In addition to being passionate about numbers and loving spreadsheets, he also enjoys homebrewing.

“I homebrewed for the first time in college and made mead in a 1-gallon Carlo Rossi wine jug,” said Allen. “It didn’t taste well because I didn’t let it age for long enough, but I’ve learned a lot since then.”

In case you’re unfamiliar with mead, it is alcohol made from fermenting honey instead of more traditional beer-making ingredients (barley and other grains). It can be comparable to white wine and have several different levels of sweetness. Allen buys honey in 5-lb containers from Tampa’s Southern Brewing & Wine Making.

In 2016, Allen bought proper homebrew equipment and now has a room in his home dedicated to the hobby.

However, his motivation is more than just a fun hobby, “The best part about it is to give it is as a cool gift.” Last Christmas, he gave out 30 bottles, including one to his grandma.

The last batch he brewed “was the best batch I ever made.” It was a semi-sweet taste and made with apricots. The mead has to sit for so long (minimum six to nine months) that Allen says, “It’s the opposite of gardening, you’re not supposed to pay attention to it.”